Milan is the global capital of design and fashion and the economic heart of Italy. Milan houses some of the world’s most famous artworks such as The Last Supper by Leonardo Da Vinci and is home to some of the biggest fashion brands.

A city that holds the highest number of Michelin star restaurants in Italy means you can dine on the best food, or find a local Italian cafe to sit and drink some of the best caffè. 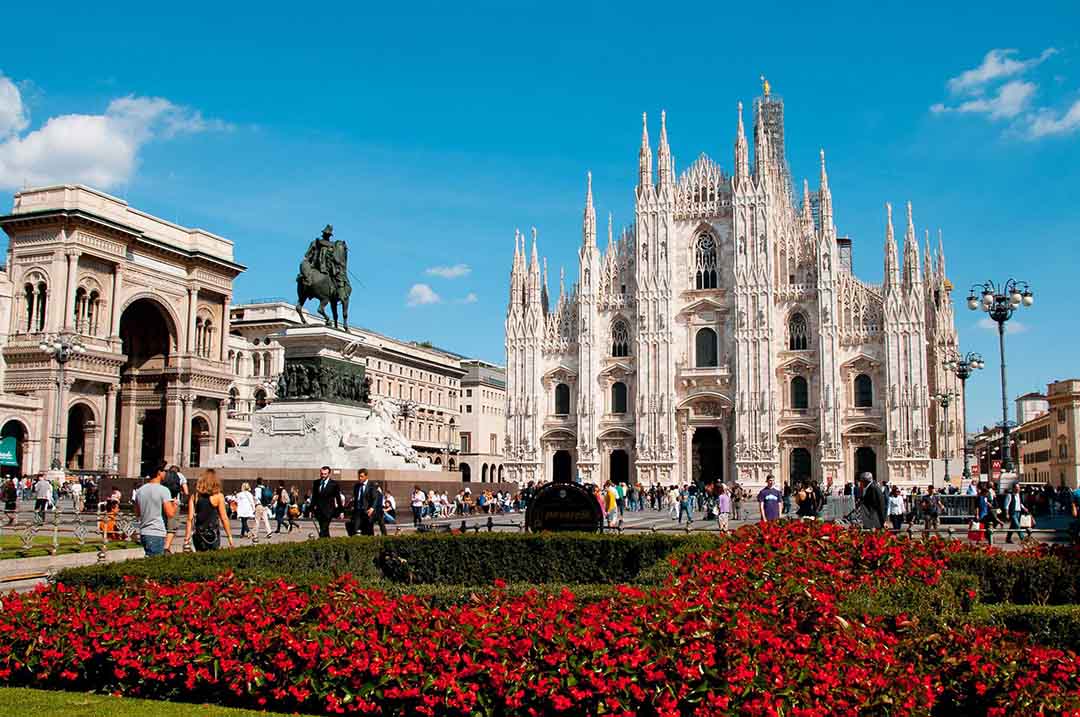 The Duomo, or Cathedral of Milan, is the number one place for tourists to visit. With 135 spires and a height of 65 meters (215 ft), the monumental building amazes with its unbelievable architecture and long history.

The cathedral is situated in the centre of the city and all streets that surround it make a circle. The rich exterior of the cathedral consists of spectacular detains and extravagant gothic elements.

Inside, you will find fascinating altars, marvellous religious paintings and marble statues. Near the main entrance is a sundial on the floor which is surprisingly precise and even used to regulate clocks throughout the city.

You can also take part in an exciting trip climbing the 919 steps to the roof of the cathedral. From that point, you would be able to see fabulous views of the city.

In the centre of Milan, you can find Italy’s oldest and most spectacular shopping gallery. Housed within a four-story double arcade in the centre of town, the Galleria is named after Victor Emmanuel II, the first king of the Kingdom of Italy.

Hundreds of small shops, a huge variety of choices and many well-known brands such as Valentino, Prada, Louis Vuitton and others line the arcade.

The Galleria is built from glass and iron, and its ceiling is made from many mosaics, which make the place a masterpiece of art.

The Galleria is famous not only because of hundreds of fashion shops but for relaxing and laid-back cafes where you can feel the atmosphere of romantic Italy.

The The Navigli district in Milan is home to the Naviglio Grande and Naviglio Pavese canals.

The Grande canal has been in existence since 1179 and was used to transport timber, marble, and other goods to the landlocked area of Milan. The most common use nowadays is a boat trip for tourists, most popular during the summer season.

The system itself consists of five canals, and on the banks of each canal, you can find many entertainment options, including bars, restaurants, karaoke, museums, and shops.

Naviglio Grande is the most popular canal among tourists, especially during the summer season. You can rent a boat and enjoy the picturesque views of astonishing Italy. 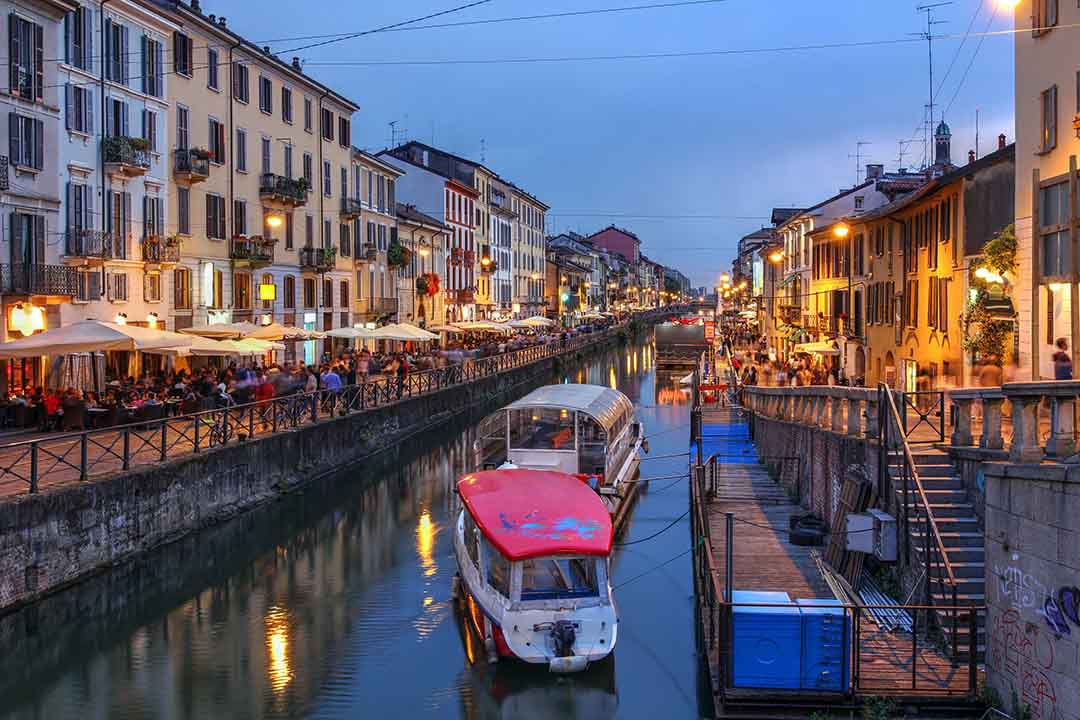 The finest place to visit in Milan for fans of the theatre is Teatro alla Scala. It is an unbelievably huge building, decorated with amazing details and creative ornaments, where you can see a lot of well-known performances. Traditionally, the season for plays at La Scala opens in early December. Starting from that time, visitors are able to become a part of fabulous art, enjoy local culture and broaden their own outlook on many social things.

Santa Maria Delle Grazie is one of the most spectacular places to see in Italy. Inside you can see one of the most outstanding masterpieces of humanity ever: Leonardo’s Last Supper. A special perspective and striking efforts to save the original picture led to our today’s ability to see it untouched by time. The church by itself is a monumental result of the most famous architects. Beautiful frescoes, enormous columns and a mysterious atmosphere attract many curious tourists from all over the world.

Milan is the capital of fashion and thus, visiting Milan for shopping has become a dream for millions of people. Armani, Versace, Gabbana, and Chanel fashion houses are excited to show their new collections and bring to a crowd the unique taste of beauty. Fashion District is a small town in a big city: neat streets, smiling people, pedestrianized roads and an outstanding sense of style. Via Montenapoleone is the most famous fashion street in Milan, where you can find clothes which will emphasize your individuality.

You can enjoy the most prominent Italian cultural events and exhibitions by visiting Sforzesco Castle. It has a long history and outstanding architecture. The Castle was built in the 14th century and even though it was several times renovated from that time, the building still has its charm and maintains the atmosphere of ancient history. Castle has free admission, however, you will be charged if you want to visit castle museums. 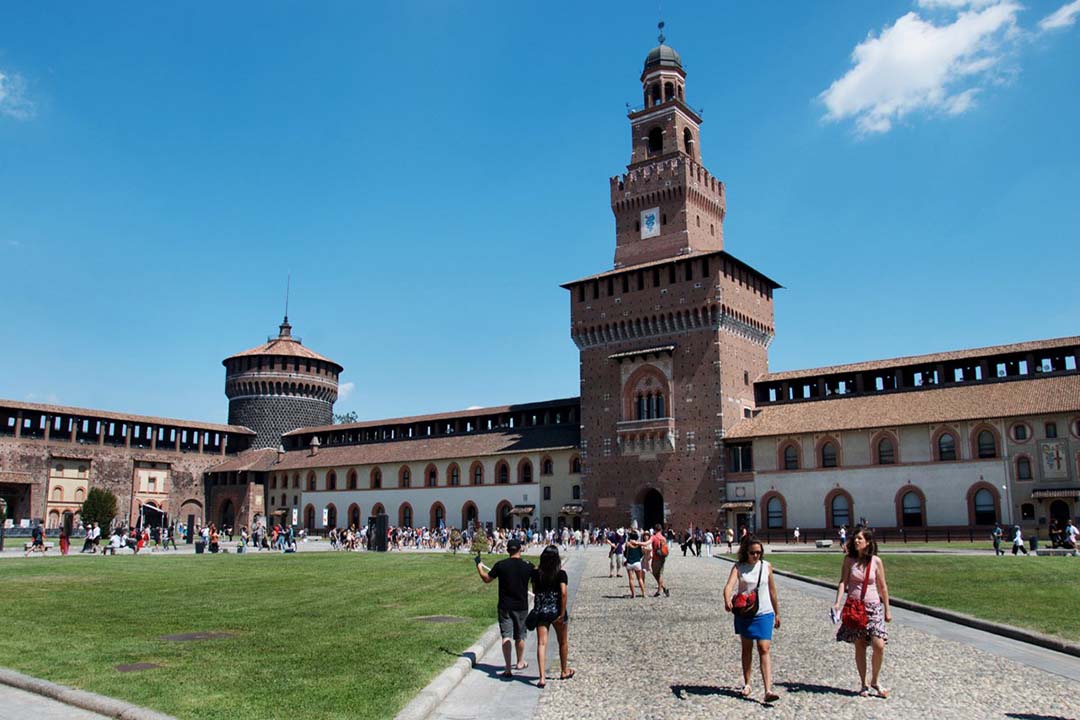 If you want to feel the unique atmosphere of Italian art, you should put Pinacoteca di Brera on your to-do list. The fascinating galleria hosts tens of the most spectacular art exhibitions in the world. The building also contains the academy of fine arts of Brera, which is well-known for its prominent graduates and high level of education. Brera National Art Gallery is recognized as a national Italian heritage.

Central Station is famous for its amazing and unusual station design. Station was first opened in the 19th century and was several times renovated from its original opening date. From year to year it was more and more modernized and today we can see it as an absolute masterpiece of art. Every day it serves millions of passengers and operates almost 600 trains/day.

Basilica of Sant’Ambrogio is one of the oldest churches in Milan. The building has a huge dramatic history and scenic architecture. The finest reliefs and amazing mosaics make this place unique and attractive to thousands of tourists.