Rome is a historical city and the capital city of Italy after being founded in 735 BC.

With its stunning architecture and many great attractions such as the Colosseum, Trevi Fountain, and Pantheon, you’ll also find the smallest country in the world in Rome, Vatican City. 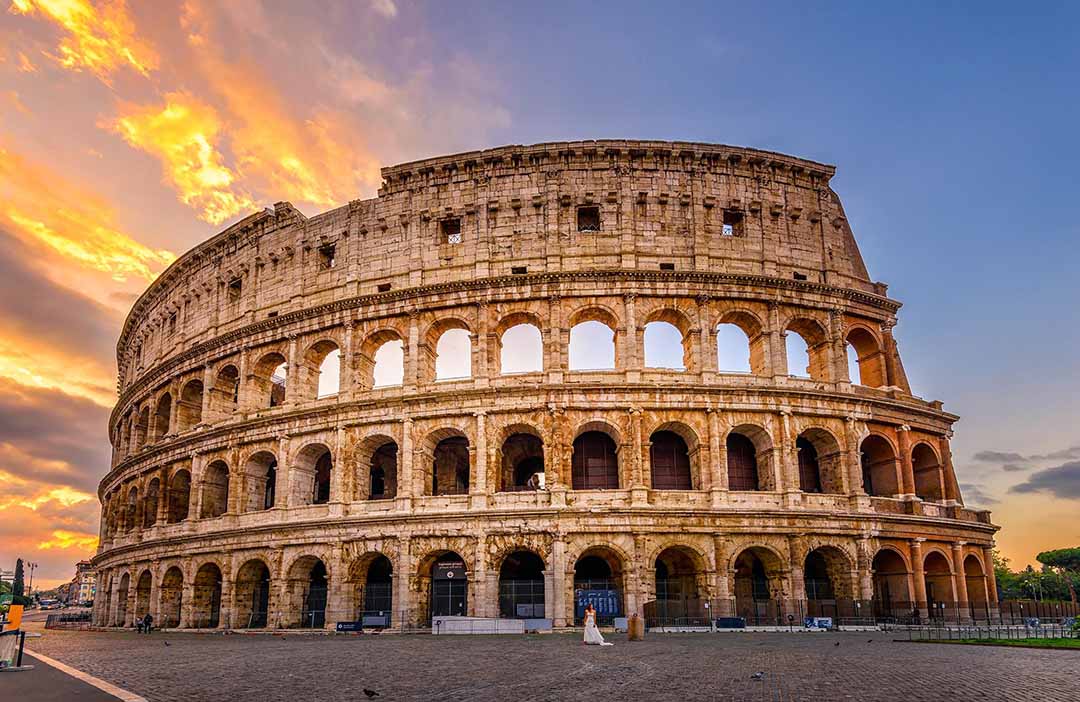 There is nothing more iconic in Rome than the Colosseum. Located in the centre of the city, east of the Roman Forum, it is the largest ancient amphitheatre ever built and is still the largest in the world today.

Constructed started on the ancient structure in 70AD and was opened in 80AD with games and festivities that lasted 100 days, and could accommodate up to 65,000 spectators.

When you are in Rome, drop by the most beautiful ruined structure in the world. From battles between humans and beasts to entertaining comical acts, and thrilling fights between gladiators, the Colosseum is a magical piece of history worth visiting.

Built and enhanced for over many centuries, the Vatican Museums are the public museums of the Vatican City and a true testament to the history of human civilization.

The museums display works from the immense collection of art which has been collected by the popes.

Another option would be to take the Vatican Museums and Saint Peter’s Basilica tour, which includes the Gallery of Tapestries, the Raphael Rooms and the Gallery of Geographical Maps.

The Roman Forum is a rectangular forum which is surrounded by the ruins of several ancient buildings in the centre of the city.

Home to temple ruins, arches, and marble fragments, there are many historical learnings to have right here. The open-air forum was used as the location of religious, social, and political activities as early as 500 BC.

As you walk around the forum, visit the Arch of Constantine, the Via Sacra, the Temple of Venus and Rome and the Arch of Titus, among many others. 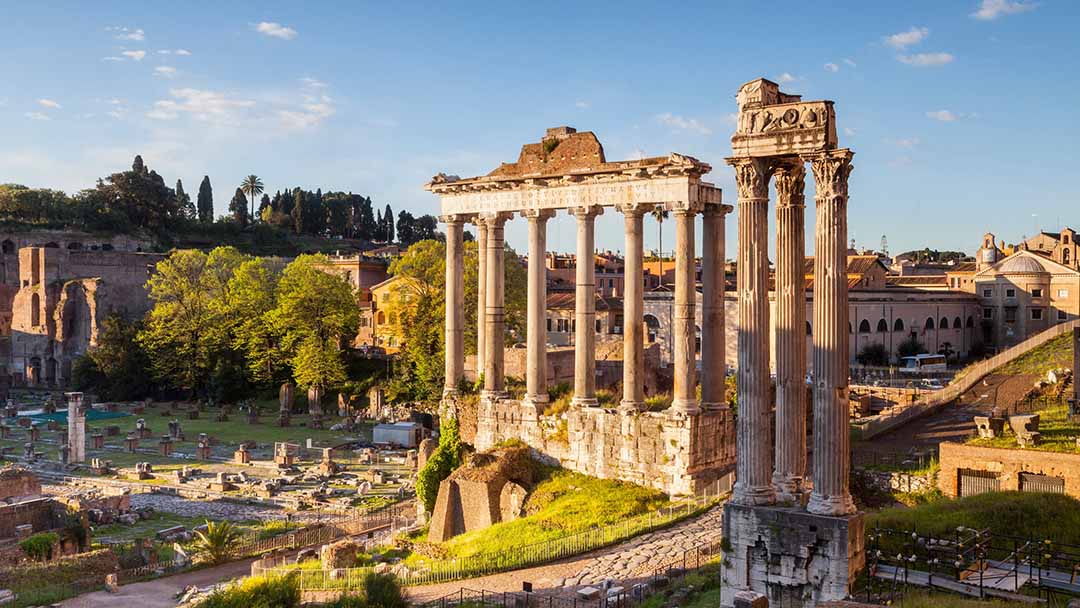 It was Emperor Constantine who decided to build St. Peter’s Basilica over 100 years ago as a shrine to St. Peter, the chief apostle who died as a martyr. Today it is one of the most important structures in all of Rome and its dome is one of the largest in the world measuring 42 meters in diameter. Once inside you will find that the Basilica is breathtakingly decorated with structures and paintings by none other than the greatest artist of all time, Gian Lorenzo Bernini. While you are here, make sure to climb to The Dome to see a spectacular panoramic view of the city.

Built by Emperor Hadrian between A.D 118 and 125, The Pantheon is an ancient pagan temple transformed by Christians into a church. It is known as the largest, unreinforced concrete dome ever built whose brilliance lies in its architecture and its significant history. Apart from the intriguing story behind it, its beauty and splendour alone make it truly worth the visit. It became an important burial chamber during the Renaissance period and up to today, you will find the tombs of the artist Raphael alongside those of King Vittorio Emanuele II and King Umberto I.

Situated in the heart of the city, a visit to Rome would not be complete without stopping by the most beautiful fountain in the world, the Fontana di Trevi. The fountain was constructed in 19 BC to bring water to Rome from around 20km away. The fountain’s central figure is Neptune, god of the sea. The best way to get to the Trevi Fountain is by foot. Every year, nearly 700,000 euros worth of coins are tossed into the fountain! If you want to learn all about the history of this structure, it is best to take a guided walking tour.

Navona Square is arguably the most beautiful of Rome’s many squares, here you will find wonderfully designed ornate fountains, and an interesting cast of street artists, hawkers, and tourists. At the centre of the square, you will find Bernini’s Fontana dei Quattro Fiumi or the Fountain of Four Rivers. Piazza Navona was home to Rome’s main public market for many years. Now that the market is long gone, tourists and locals still flock to the square to bask in its elegant baroque beauty. 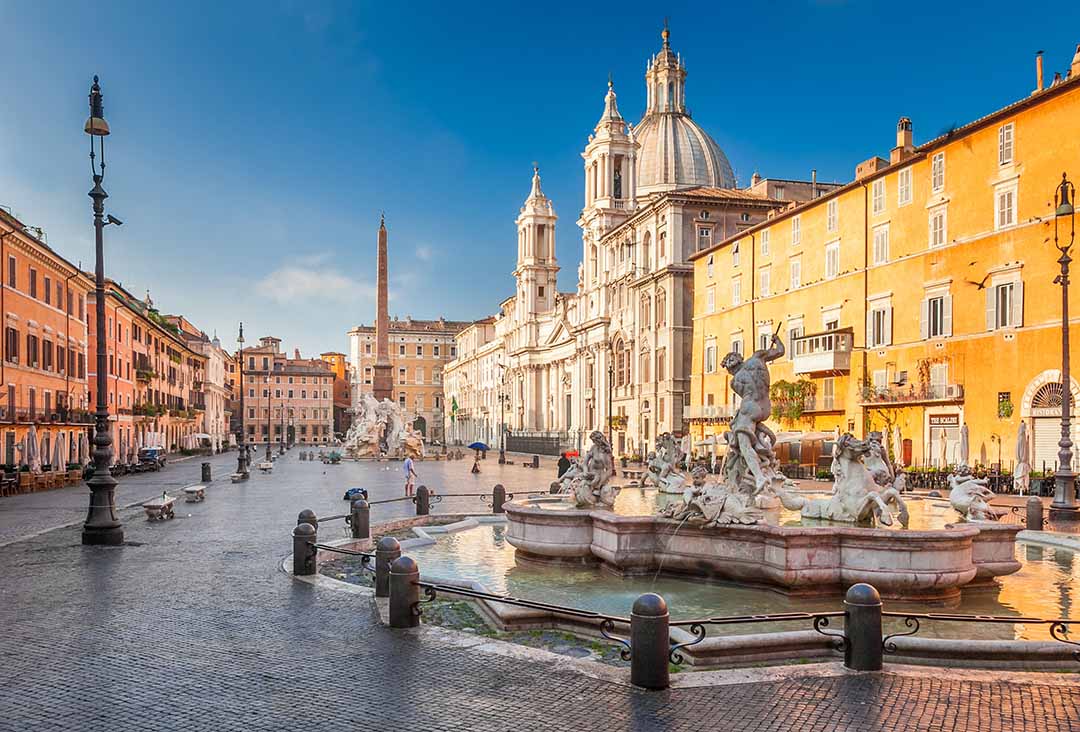 Square of the People

This large urban square, Piazza del Popolo, which means People’s Square, is surrounded by monuments, churches, fountains and marble memoirs that are testaments to Rome’s rich and colourful history. For many years, it was the site for fairs, carnivals, public executions and games. Today visitors from all over the world pay homage to the site’s cultural and historical splendour. Make sure to look for the obelisk or the Obelisco Flaminio, as well as the twin churches of Santa Maria dei Miracoli and Santa Maria di Montesanto.

Since the 18th century, Rome’s Spanish Steps, or Piazza di Spagna, have been a magnet for visitors from all over the world. Built in 1725, the stairs were designed by a French artist named Francesco de Sanctis. Make sure to take a photo by the foot of the stairs where you will find the famous Barcaccia Fountain or “the Sinking Boat”, which was believed to be built by Pietro Bernini. The Piazza di Spagna’s ramps and stairs are still considered one of the world’s most amazing architectural feats making it one of Rome’s most visited attractions.

The Castel Sant’Angelo is one of Rome’s most recognizable structures. It was built as a mausoleum for the emperor Hadrian and was converted into a papal fortress in the 6th century. A visit here would welcome you into a world of eclectic paintings, sculptures, medieval firearms and military memorabilia, many of which were used by soldiers to protect the fortress. Visit the castle’s upper floors to see lavishly decorated interiors that are a treat for any art enthusiast. Go up two more flights to reach the terrace where you will see a marvellous panoramic view of the entire city.