Dubrovnik is a beautiful city located in southern Croatia along the Adriatic sea. Known for its magnificent 16th-century city walls, the old town, and baroque buildings.

Whether you’re sitting in a cafe in the city and watching the world go by, or walking around the nearby Lokrum Island and looking back on the city walls, you’ll never be short of things to do or see in Croatia. 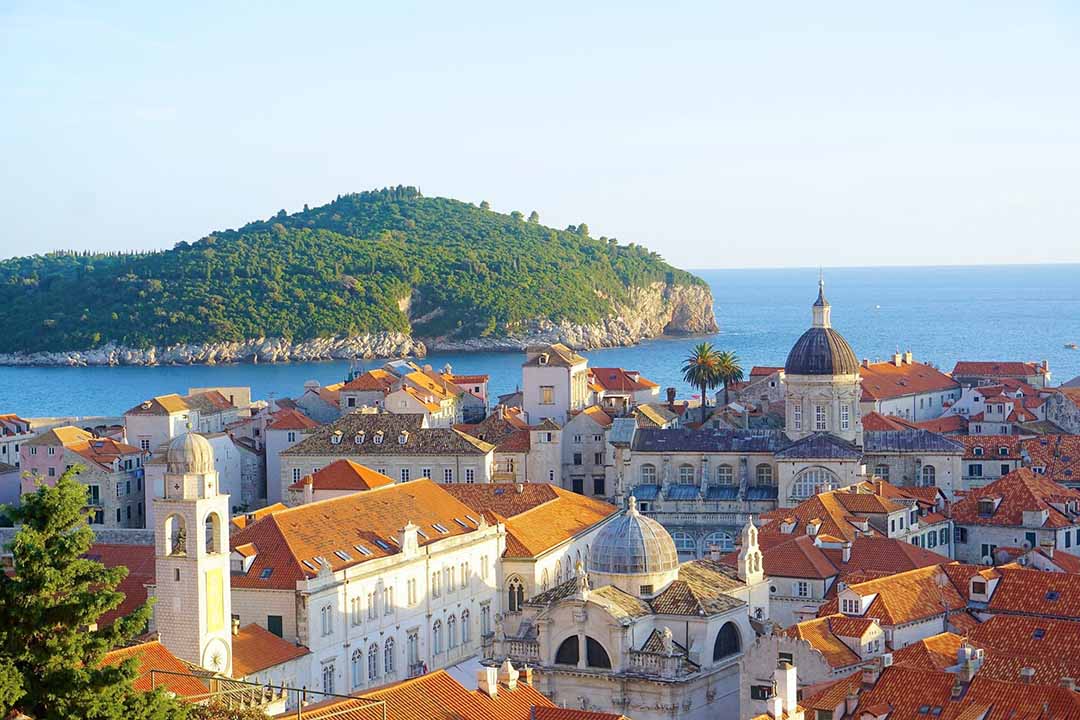 Dubrovnik is a city of rich history, and all it takes is a trip to the City Walls to see it for yourself. These barricades have been standing, intact, since the 12th century. No enemy army was ever able to penetrate them, even during the eight sieges visited upon the city since the 9th century.

The walls even sustained the earthquake of 1667, to which so many other buildings and structures in the city fell prey. Over the years, Dubrovnik developed a reputation for being “unconquerable”, thanks to the fortitude of the City Walls.

Walking around the city walls are a great way to see the Old Town and views of the Adriatic sea from above.

600 metres from Dubrovnik is Lokrum, an island in the Adriatic Sea. At just 1.5 miles in length, the island is covered by thick woods and over 400 species of plants, with rugged cliffs, peacocks, and a small beach.

Once the site of a Benedictine abbey and monastery, Lokrum is now a popular tourist destination. In the time of the Benedictines, this island was used to cultivate all manner of exotic plant life, many of which still exist in the island’s famed botanical gardens.

Archduke Maximilian Ferdinand of Habsburg built a mansion on the island in the 19th century, and one of his remaining legacies here are the peacocks he brought in from the Canary Islands.

You can reach Lokrum by a 10-minute boat road from Dubrovnik. There’s no transport on the island, so be prepared to walk everywhere, including up to the highest 96m point on the island where Fort Royal Castle stands.

There is nothing like a ride in a cable car, and Dubrovnik takes this experience to the next level. This cable car was built in 1969 and covers almost half a ­mile (778m) in under 4 minutes. The views afforded at the top are breathtaking.

From atop Mount Srdj, all of Dubrovnik is visible below, with the cerulean blue of the Adriatic sea twinkling in the sunlight beyond.

While at the top, visit the Imperial Fortress. Most recently the front line of the Homeland War of 1991, it is now home to the Museum of the Croatian War of Independence. 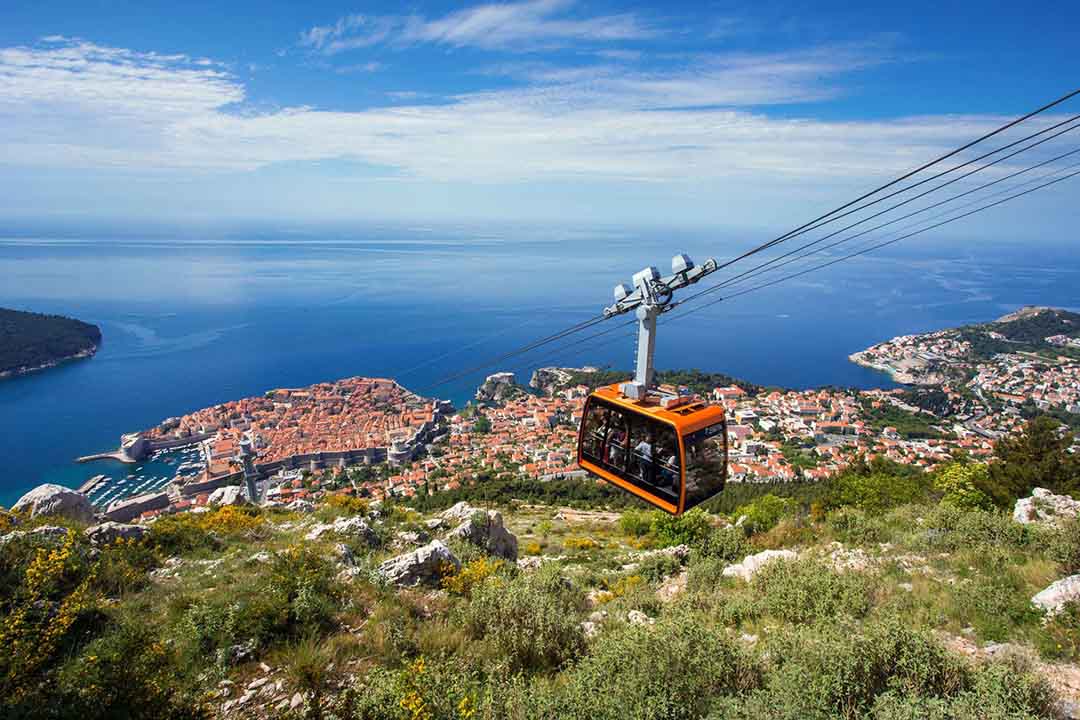 This monastery was built in 1317. Like so many other buildings in the city, it was largely rebuilt after the 1667 earthquake, although many original elements still remain. Marvel at the bell tower and the gorgeous stone architecture. Enjoy a turn through the vibrant courtyard. Afterwards, visit the Pharmacy, which has been continuously operational since the monastery’s foundation and displays ancient tools and instruments on its shelves.

Don’t just stop at the City Walls; dive into Dubrovnik’s Old Town on this famed pedestrian walkway. The esplanade is approximately 984 ft (300m) in length and features many of Dubrovnik’s most historic sites. It is bookended by bell towers, 15th­century water fountains, and the eastern and western gates into the walled city. Every February, the procession for the Feast of St. Blaise traverses the Stradun. To walk down Stradun is to walk alongside centuries of history, a history that you can feel with every step.

Built-in the 16th century, the Sponza Palace has been, at varying points in its history, a treasury, a customs office, a bank, a mint, and a school. It was one of the buildings that endured the earthquake of 1667, which was especially good news since it was such a pivotal centre of affairs of state. It is now home to the city archives, and the front square hosts the opening ceremony of the Dubrovnik Summer Festival every year.

The wooden drawbridge to this gate used to be raised every evening, and its keys handed to the Rector in an elaborate ceremony, which was repeated every morning when the Rector returned the keys. That ceremony may have ended with the fall of the Dubrovnik Republic, but the stately gate remains. St. Blaise, the patron saint of the city, looks down upon the passersby filing into the old city. The outside gate leads to a smaller inner gate, which leads onto the Stradun and all the marvels of Old Dubrovnik. 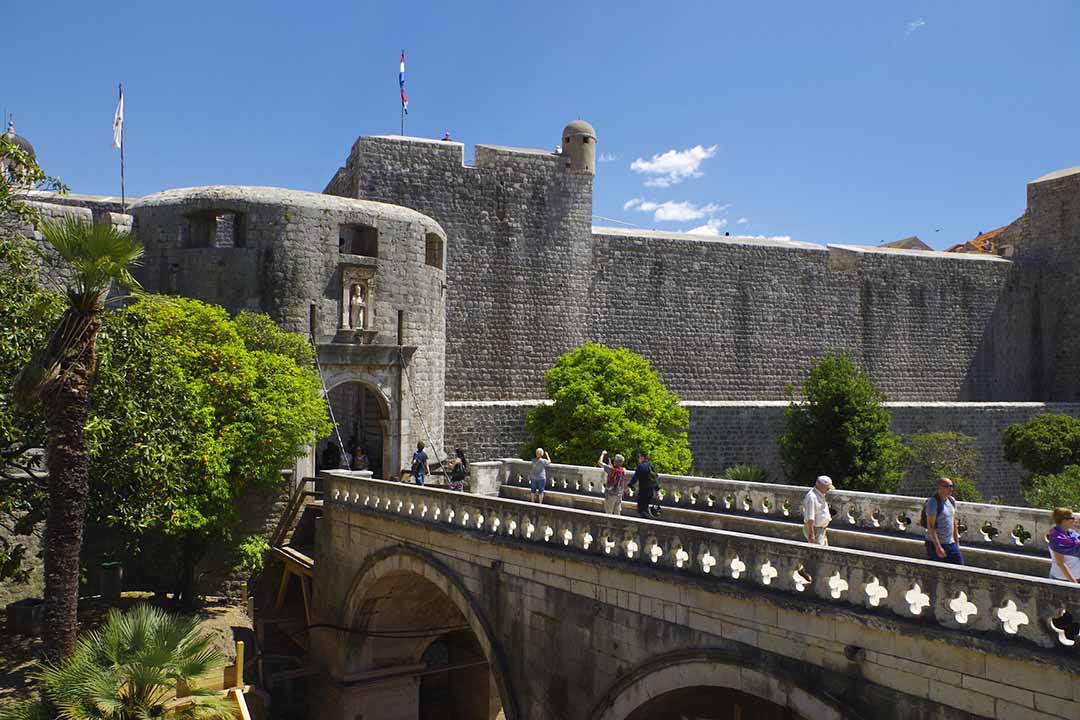 Cathedral of the Assumption of the Virgin

The first cathedral on this site was built in the 6th century, and many other cathedrals came and went before the one that stands today. Also known as Dubrovnik Cathedral, its alternate name likely comes from the gorgeous 16th-century painting of The Assumption that hangs above the altar. It stands next to the Cathedral Treasury which possesses, among a long list of relics, the arm, leg and skull of St. Blaise, as well as a fragment of the True Cross.

St. Blaise is the patron saint of Dubrovnik, because, according to legend, he warned the town of a forthcoming surprise attack by the Venetian ships that had been peacefully harbouring in the bay. Thanks to this advance warning, Dubrovnik was able to fortify itself. The Venetians, seeing that their efforts had been thwarted, sailed back home. St. Blaise has been hailed as the city’s protector, and this church was built in his honour. The original church was constructed in the 14th century, but was destroyed first by a fire and then by an earthquake. Its current iteration was finished in 1714.
Website: www.dubrovnikcity.com

Until the fall of the Dubrovnik Republic in 1808, this palace housed the Rector, whose official duties included the daily ritual of accepting the keys to the city gates in the evening and returning them in the morning. The Palace was also the seat of the Small Council, whom the Rector appointed. While the Palace had the typical halls for receptions and dances, it also had an armoury, a gunpowder warehouse, and a dungeon. The gunpowder warehouse proved to be problematic when the palace was damaged by explosions in 1435 and 1463. After the earthquake in 1667, the repairs to the Palace made it into its current architectural blend of Gothic, Renaissance, and Baroque styles.