Budapest, the capital city of Hungary, is dubbed the “Pearl of the Danube” and makes a great city break destination. With all the history and beauty that Budapest has to offer be sure to check out the sights and sounds of this beautiful city.

Divided by the mighty Danube, Europe’s longest river, Budapest was two cities until 1873. Wooded Buda occupies the hills to the west and Pest lies on the flat east bank, with city avenues that rival Paris for grandeur. Over 15 million gallons of water bubble into Budapest’s 118 springs and boreholes every day. That number points to the astounding array of baths in this city, from the sparkling Gellert Baths to the vast 1913 neo-baroque Szechenyi Spa to Rudas Spa, a dramatic 16th-century Turkish pool with original Ottoman architecture. 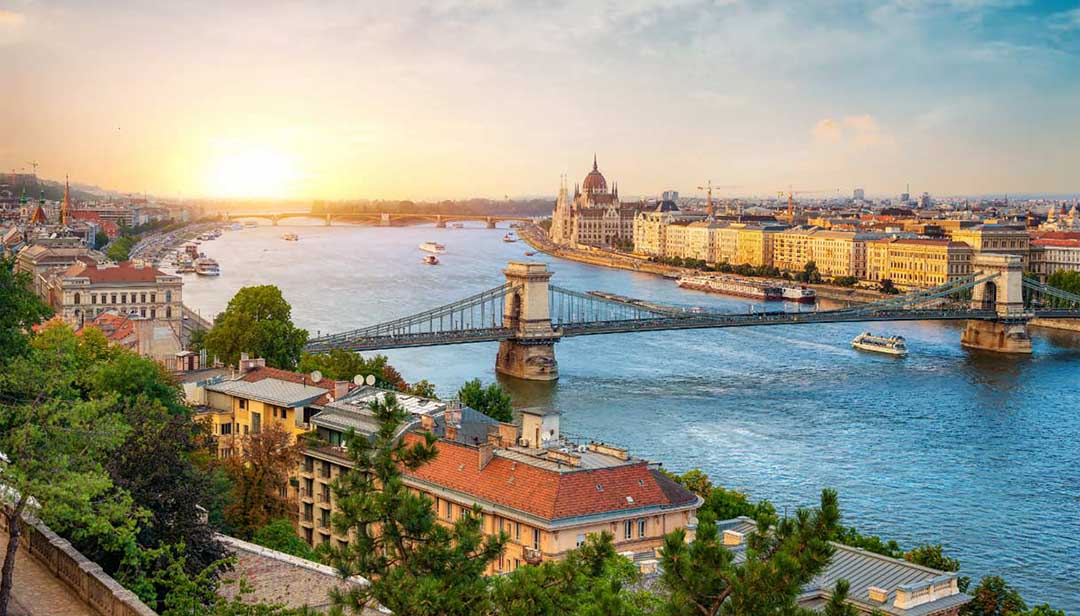 The Hungarian Parliament Building is located on the Pest side of the City, on the bank of the Danube. Similar in style and scale to the British Houses of Parliament, this neo-Gothic building was built between 1885 to 1902 and is the largest building in Hungary.

The Hungarian crown is displayed in the central lobby beneath the massive dome and statues of historical figures in Hungarian history surround this impressive space. The two debating chambers lead off and can be visited on organised tours.

There’s often a queue for tickets outside the main entrance but it’s well worth the wait.

Buda Castle is one of the most visited sights of Budapest, a Unesco World Heritage location, with plenty of interesting attractions, museums, quaint streets and squares, restaurants and shops.

Most first-time visitors to Budapest will head to Buda’s Castle District (Varnegyed), sitting high above the Danube and reached by the quaint funicular from the Chain Bridge. You could choose to walk up the hill or take the Buda Hill Funicular up to the castle. Once you reach the top, look out at the spectacular views across Budapest and into the distance.

Near the top of the funicular, the National Dance Theatre sits next to the Hungarian President’s residence. Then it’s Disz ter, once the heart of the district before Tarnok utca, or Treasurer’s Street, which is lined with beautiful houses, many now converted to souvenir shops.

The Chain Bridge spans the river between Buda and Pest at a length of 375m (1230ft). Opened in 1849 and later restored on its hundredth anniversary, this bridge is a significant attraction in Budapest and was the first permanent bridge to link Buda and Pest.

The Chain Bridge was designed by English engineer William Tierney Clark and is a must-visit for every tourist who comes to the city.

Visitors can take amazing photos of the Chain Bridge with the Buda Castle or the Hungarian Parliament in the background, the best of which can be seen at night when the bridge is illuminated. 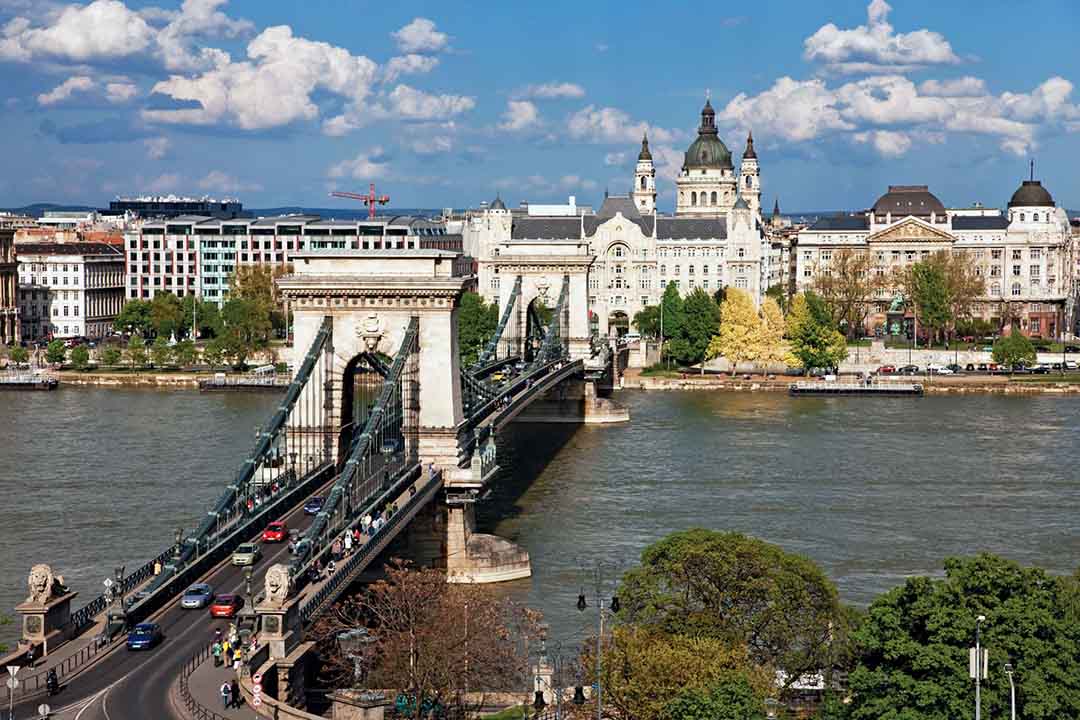 The Castle District in Buda is the ancient kernel of the capital’s right-bank settlement. The Royal Palace houses different museums and exhibitions. The Castle District is one of the most visited tourist attractions in Budapest. Walking over it at night gives you a magnificent view of the Buda Castle.

The building of the town began in the middle of the thirteenth century. At the time of the 1241 Mongol invasion the town of Pest, built on the plain on the site of today’s Inner City and thus completely defenceless, had been burnt down and its population put to the sword. Thus it seemed safer to build a new city protected by ramparts on the other side of the river, on the plateau on top of the steep limestone hill. The Royal Castle was built at the southern end of the plateau, the civilian town to the north. At first, the town was protected only by fences and the walls of the houses, but by the early sixteenth century it was surrounded by strong ramparts.

The monumental square at the end of Andrássy Avenue sums up the history of Hungary. The millennium memorial commemorates the 1000th anniversary of the arrival of the Hungarians in the Carpathian Basin. Heroes’ Square is the biggest square in Budapest.

The central site of the square, as well as a landmark of Budapest, is the Millennium Memorial (also known as Millennium Monument or Millenary Monument) with statues of the leaders of the seven tribes that founded Hungary in the 9th century and other outstanding figures of Hungarian history. The construction of the memorial was started when the one-thousandth anniversary was celebrated (in 1896), but it was finished only in 1929 and the square got its name then.

On the top of the 36-meter high column, seeing sits a bronze statue of the Archangel Gabriel, and in front of it, there’s the Monument of National Heroes (Tomb of the unknown soldier).

The largest Catholic church in Budapest, where the most important relic of Hungarian Catholicism, the Holy Right of King St. Steven is kept. The panorama terrace offers a great view of the city and along with the Hungarian Parliament Building, it is the tallest building in Budapest at 96m. It was completed in 1905 after 54 years of construction. Much of this delay can be attributed to the collapse of the dome in 1868 which required complete demolition of the completed works and rebuilding from the ground up.

The architectural style is neoclassical and the interior is laid out in a Greek cross, and the facade is anchored by two large bell towers. Visitors may access the dome by elevators or 364 stairs for a 360° view overlooking Budapest. 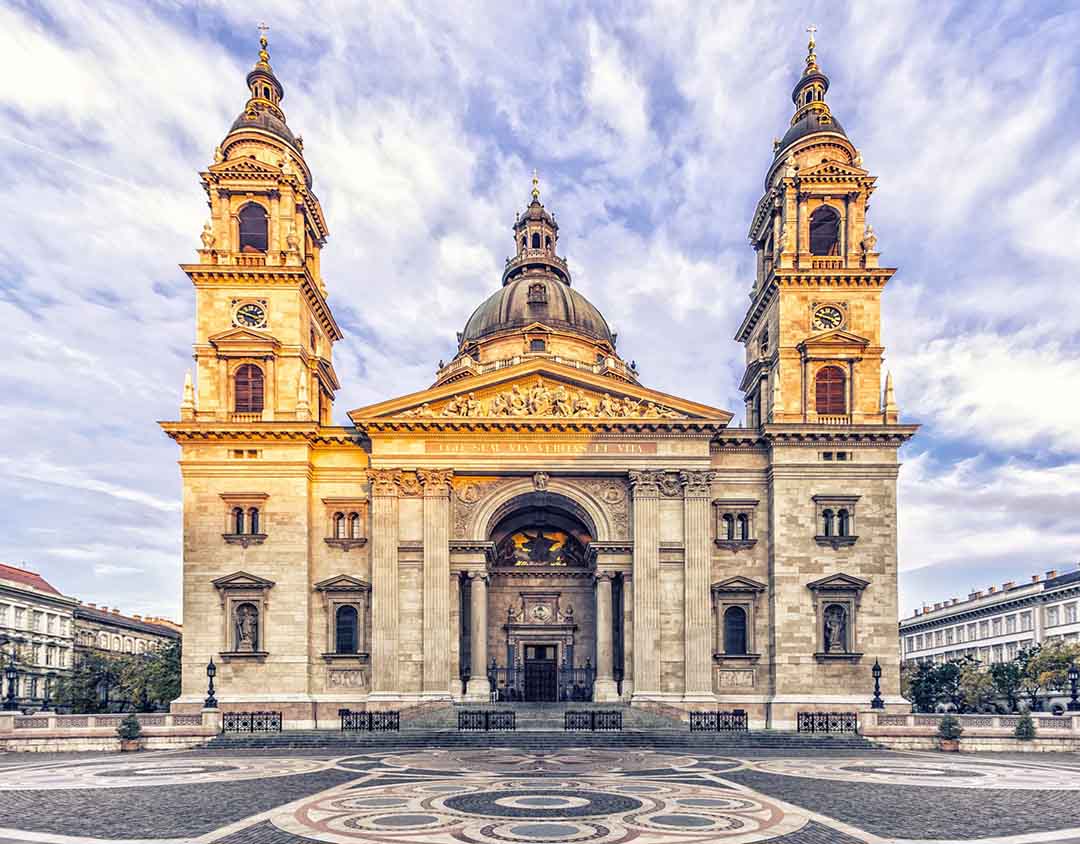 This tourist attraction is popularly known as the Fishermen’s Bastion. This famous edifice was built between 1895 and 1902 and lies behind the Matthias Church. The Bastion was constructed as a defence installation by the fishermen during the Middle Ages. Frigyes Schulek designed the building in the Neo-Romanesque style, which features embrasures, colonnades and towers. The best part is that you can enjoy the excellent views of the mighty River Danube and the entire city from this place.

The most popular bathhouse in Budapest for tourists and locals, the Szechenti Bath is the biggest medicinal bath in Europe. Hungary is located on the Carpathian Basin, where the earth’s crust is very thin, bringing over 1,000 hot springs below Hungary and spanning more than 75% of the country. The medicinal baths and thermal waters, ranging from 21 and 78 degrees Celsius (70-172 Fahrenheit), are great for improving circulation and soothing sore muscles thanks to the minerals in the water such as sodium, calcium, sulphate, magnesium, and more.

Shoes on the Danube Bank

This permanent installation of 60 pairs of empty cast-iron shoes on the Danube Bank is a memorial by sculptor Gyula Pauer and filmmaker Can Togay. Located on the Pest side of the Danube embankment,  this memorial is for the thousands of victims of Hungary’s fascist organisation, the Arrow Cross, in 1944-1945. The shoes signify the men, women, and children who were relieved of their footwear and shot dead for their bodies to fall into the Danube and be washed away. 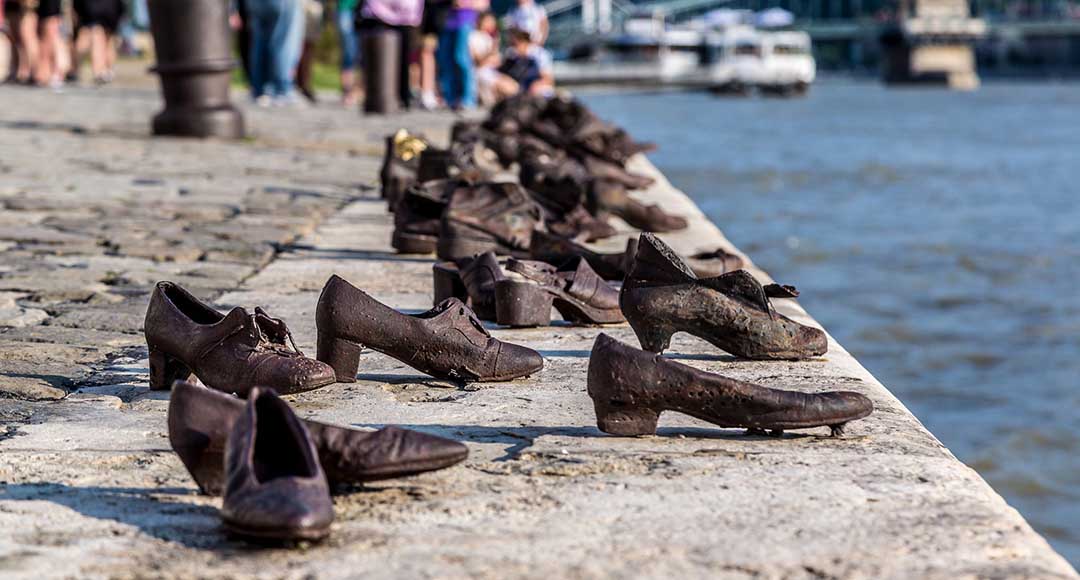 The Dohány Street Synagogue or Great Synagogue in Budapest is the largest synagogue in Europe and the second-largest in the world. It seats 3,000 people and is a centre of Neolog Judaism. It was built between 1854-1859 by the Neolog Jewish community of Pest according to the plans of the Viennese architect Ludwig Foerster. The synagogue neighbours a major Budapest thoroughfare expressing the optimism and the newly elevated status of the Hungarian Jews in the mid-years of the 19th century.

Adjoining the main building (on the corner of Wesselényi u.) is the Heroes Temple, which seats 250 people and is used for religious services on weekdays. Although not open to the public, the Lazlo Vago/Ferenc Farogó design serves as a memorial to Hungarian Jews who gave their lives during World War I.

Based on Paris’ Champs Elysee, this 2.5km avenue took 20 years to complete from 1872. It’s lined with fine mansions, luxury shops and cultural attractions like the Opera House. Some buildings still show damage from the 1956 Uprising when the street was called Stalin Avenue. Many photographs of the victims of the 1956 Uprising are displayed around the exterior walls of the Museum of Terror – the building’s awning has the word TERROR cut out of it.

At the northern end of Andrassy Avenue is the vast Heroes’ Square with an imposing column and statues of Arpad and the Magyar chiefs that founded Hungary over 1000 years ago. This is city architecture on a grand scale. To the left of Heroes’ Square is the Museum of Fine Arts (Szepuveszeti Muzeum) and to the right, the Museum of Contemporary Art. Beyond the Square is the City Park with large ornamental lakes, the zoo and the famous Szechenyi Baths.

Behind Heroe’s square lies the City Park, the largest park on the Pest side. The area was once part of the sand and grass-covered Field of Rákos, wherein former days the Diets and the national markets were held and at the beginning of the last century, it was converted into a park. By the turn of the century, it had already become a place of entertainment popular with all layers of society. Members of the aristocracy drove out here in their carriages and exercised their horses, the middle-classes came here for a day out, and the workers organised their meetings and their May Day demonstrations.

Behind Heroe’s square and the Museum of Fine Arts, on Állatkerti körút (Zoo Boulevard) is the Zoo with the Municipal Circus next to it; further down is the Amusement Park and on the opposite side are the Széchenyi Baths. Immediately behind Hôsök, there is the artificial lake used for rowing in summer, it becomes an artificial skating rink in winter.