Madrid is Spain’s capital and is the Iberian Peninsula’s largest city, and is the 16th most livable city in the world (as of 2021). The city is in the heart of Spain and is relatively small with a population of 3.2 million people. 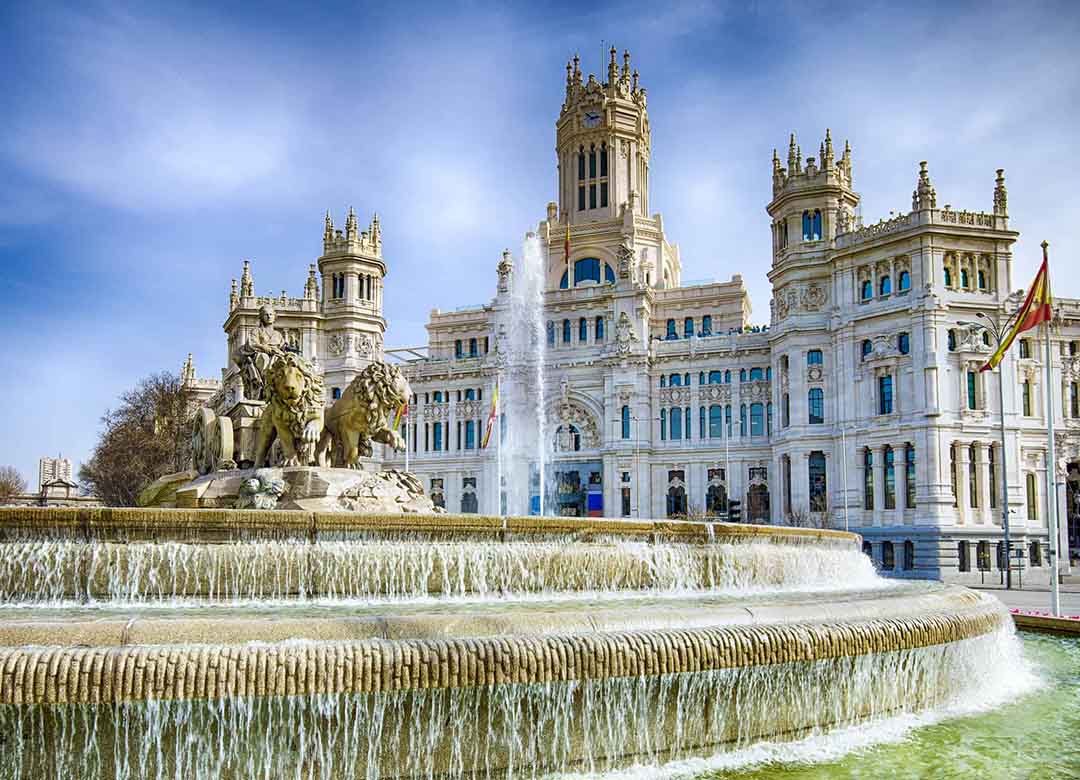 The climate in the city is said to be the continental Mediterranean where summers are hot, especially during July and August with average temperatures above 24°C (75°F). Winters are cool with an average temperature below 6°C (43°F) and frosts and snowfalls are usually observed during this season.

Parque del Retiro certainly lives up to its name, which in English means “Park of the Pleasant Retreat”. The park is now open to the public, but until the 19th century belonged to the Spanish monarchy, and is one of the biggest parks in Madrid. Its history of belonging to the royalties is evident in its grandeur and romantic appearance.

It boasts unbelievable gardens lined with white statues, a large monument to Alfonso XII that overlooks a large pond where people are encouraged to take out small boats, as well as the Crystal Palace. Here is where you’ll find serenity (even as the park is surrounded by the current city of Madrid) and an unforgettable, relaxing afternoon.

Once the centre of Old Madrid, Plaza Mayor was built in the late 1500s and is one of the larger, central plazas in the city. At the plaza’s centre sits a bronze, equestrian statue of Philip III, constructed in 1616

When you arrive, you’ll find yourself in an open rectangular area surrounded by historic buildings with period architecture. The plaza often holds big events, so perhaps you will be lucky enough to see markets, football games, or public exhibitions.

This is a great place to spend the afternoon picture-taking, perusing shops, visiting the popular Bakery House on the square, or simply soaking up the sun and watching the world go by. 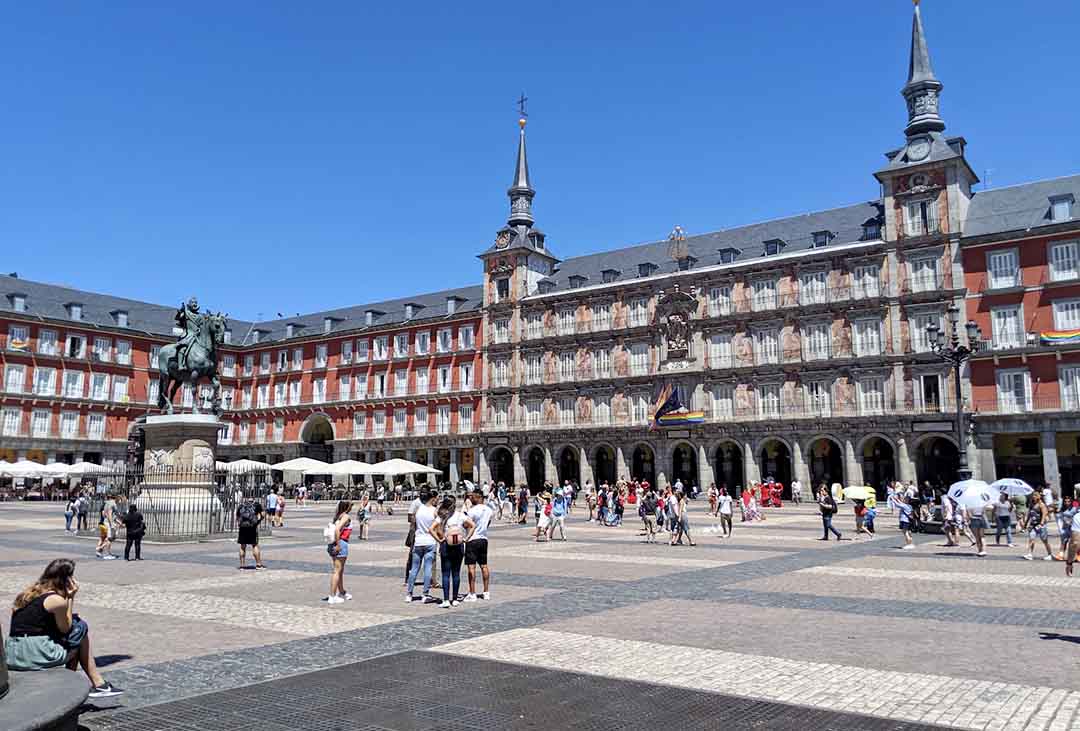 Plaza de Cibeles sits in the heart of the city, at the intersection of the Paseo del Prado and Calle Alcalá. This area has become what many envision when Madrid is mentioned.

At the centre of the plaza is the Cibeles Fountain, made and named for the Phrygian goddess, Cybele. The goddess sits in a chariot while two lions pull her.

Other large, impressive works of architecture fill the plaza including Banco de España (Bank of Spain), the Palacio de Linares and of course the Palacio de Cibeles.

Plaza de Cibeles has plenty of grandiose for visitors but also amazing architecture and monuments very symbolic of the city of Madrid. Don’t miss out on seeing this area before you leave!

La Puerta del Sol is the most centrally located square in the entire city of Madrid. So, when we talk about seeing and experiencing the heart of a city, this is it! Since 1962 this has been the location for the live broadcasting of the New Year celebration, comparable to Times Square in New York. This is also the place where you can see the clock famous for signalling the beginning of the new year and the eating of the twelve grapes.

This square truly has its all-modern significance for the locals, history (it was at one time around the 15th century one of the gates that surrounded and protected the city), sight-seeing (plenty of statues, famous buildings, and landmarks), and food and shopping areas!

Here is Spain’s best collection of 20th-century art. Most of the art is also Spanish. The museum houses three main collections which are divided by theme and year, splitting the 20th century into three artistic eras: The Irruption of the 20th Century: Utopias and Conflicts (1900-1945); Is the War Over? Art in a Divided World (1945-1968); From Revolt to Postmodernity (1962-1982).

In addition to its excellent collection, it also offers national and international exhibitions, taking place temporarily throughout the year.

This is Spain’s main national art museum, one of the world’s most impressive collections of art, and a perfect example of Spanish art and heritage. It has everything from painting and sculpture to decorative arts and drawings.

There are three main routes available to visitors that have been organized so that people may best see the masterpieces it offers. What better way to understand Spanish culture and history through the ages than by an informative walk through hallways and exhibitions of some of the best art on the planet?

Whilst you’re at Plaza Mayor make sure you visit the Mercado San Miguel w and sample the culinary delights. Opened in May 1916 as a local food market, this is a great meeting point for food lovers and an afternoon of amazing food and wine. 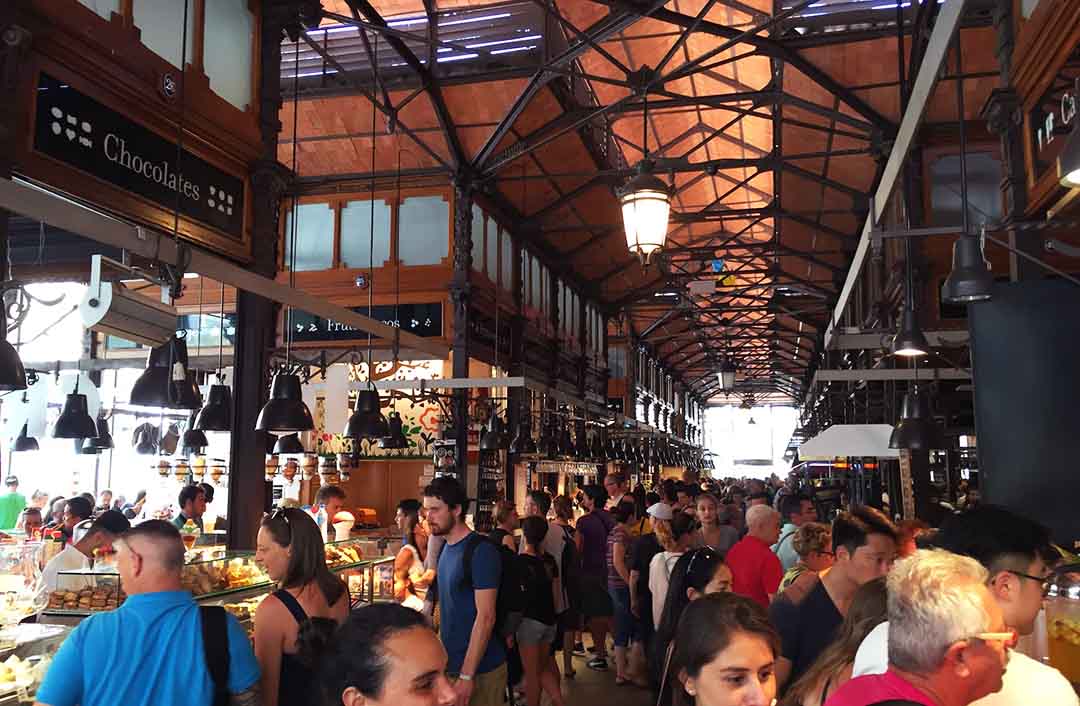 This neoclassical monument stands proudly in the city centre, adjacent to the entrance to El Parque del Buen Retiro and in the Plaza de la Independencia (Independence Square). Originally this was to be a gate, which King Charles hoped would be a passage to the road to the city of Alcala.

Over the years there have been songs written about it, events held because of it, and important cultural traditions performed through it.

This palace was home to King Carlos III until King Alfonso XIII and is now open to the public. It remains their official residence even though it is no longer where the royal family calls home. Every Wednesday people are welcome to gather and watch the changing of the guard outside of the palace doors.

It is a beautifully designed, large, white building whose appearance demands instant awe and admiration. It’s a must-see if you’re into architecture and the histories involving the royal families of Spain! 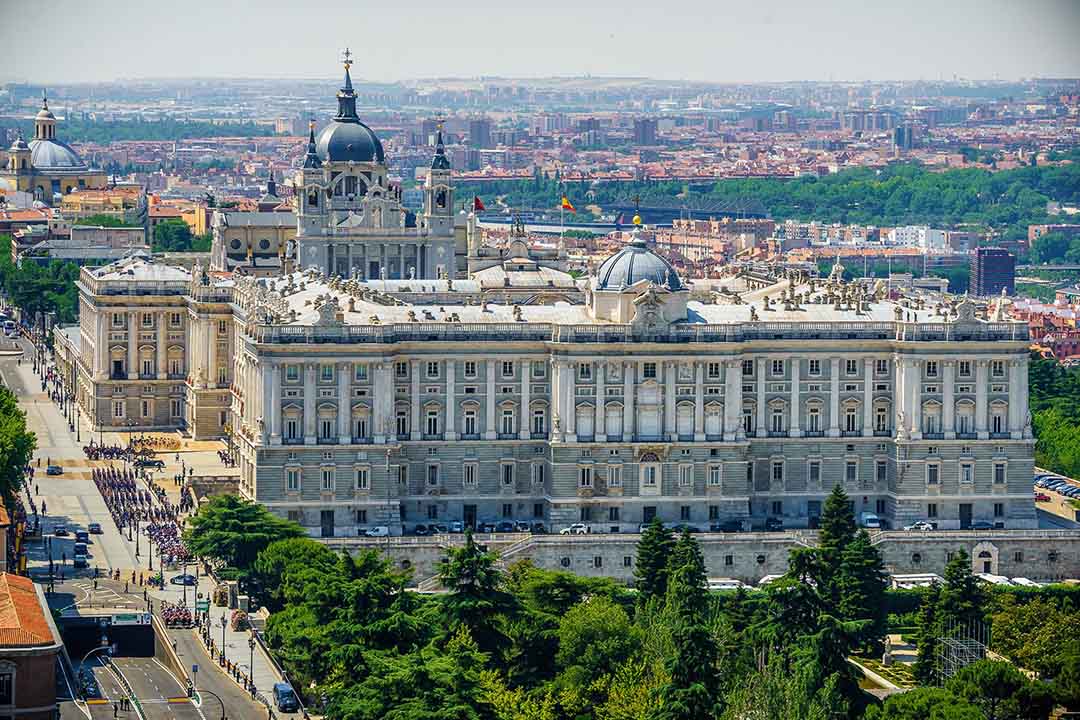 The turbulent and frustrating history involving the construction of this cathedral dates back to the reign of King Philip. After declaring Madrid the capital of Spain he wanted a cathedral in the city, but opposition from the archdiocese in Toledo postponed its creation. Over the centuries, civil war and fuss over the originally intended style it was to be built in would further complicate the process. Finally, the cathedral was officially considered finished in the year 1993.

To stand in front of this cathedral is to see the final product of centuries of struggle, and it is a unique experience indeed!

Madrid’s “Great Way” is many things: a high-end shopping street, a great example of early 20th-century architecture, and one of the city’s liveliest areas.

Here is where you’ll find movie theatres, hotels, shopping malls, and all the ornate, well-designed buildings you could ever hope for. The Metropolis Building, the Telefonica headquarters, and the Edificio Grassy are some of the big attractions in architecture that can be seen here.

This is a street that bustles perpetually with activity and an exciting half-day experience!