The Jurassic Coast is one of the most popular destinations in England, attracting tourists from all over the world. Whether you want to hunt for fossils, visit a museum or simply take in the stunning views on a stroll, you’ll find there’s plenty to do at any time of year on the 96 mile Jurassic coastline.

The Jurassic Coast stretches 96 miles along the south of England from Exmouth in East Devon to Studland Bay in Dorset. The towering white cliffs above the sea are an iconic image of Great Britain, while the Dorset coastline has some of the best scenery in the UK. This UNESCO World Heritage Site has more than just stunning views. 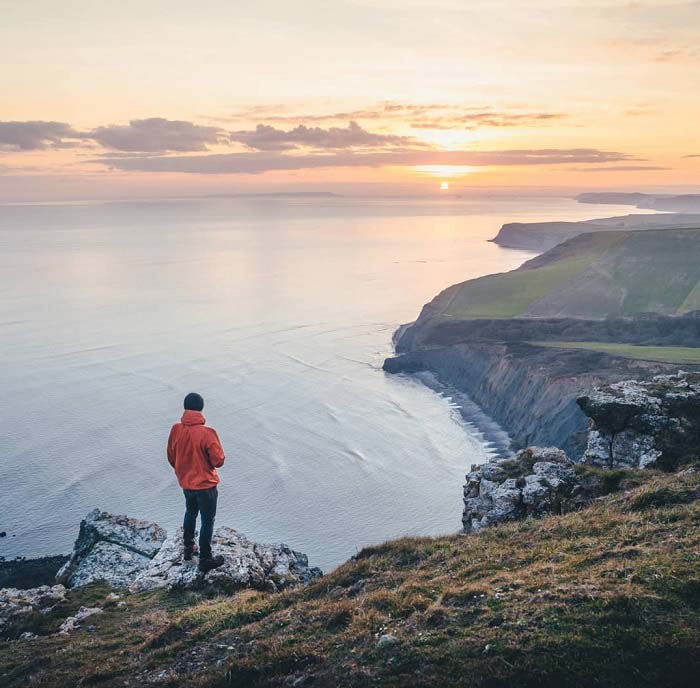 You can explore the rock pools in the cove or drop yourself on the golden beaches stretching for miles. Let your mind wander at the old castles and hunt for dinosaur fossils on the beaches. After walking along windy coastal roads, warm up in a cosy English-style pub with a local beer. It’s a great place to go for a few days or even a week!

The outstanding sights on the Jurassic coast

This UNESCO World Heritage Site is one of Britain’s most beautiful regions. From astonishing seaside landscapes to charming coastal towns, rough hiking trails to the most interesting local breweries, here are a selection of Jurassic Coast sights.

The Durdle Gate is the iconic image of the Jurassic Coast. Over time, the crashing waves eroded much of the limestone leaving a beautiful natural arch trapped in the ocean. It’s a stunning view and a 5-minute walk from the Durdle Door parking lot. 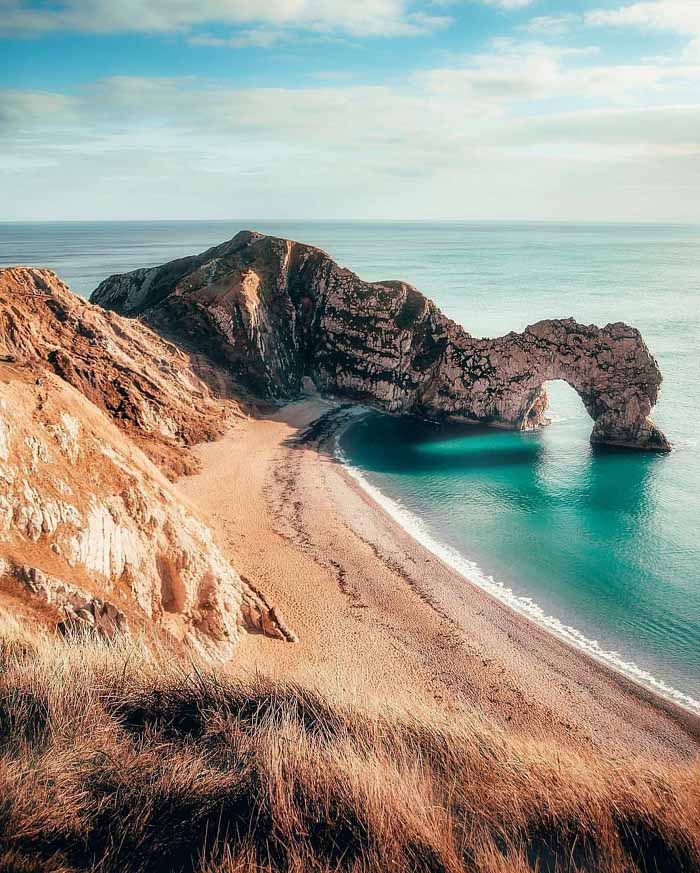 This part of the Jurassic coast has some of the best scenery anywhere in Dorset. Right next to Durdle Gate are the beautiful wide sandy beaches of Man O’War beach, creating an attractive beach corner. If you feel more energetic, walk along undulating paths clinging to the cliff edges with stunning views along the coast and into the sea. It’s one of the many great short walking paths! 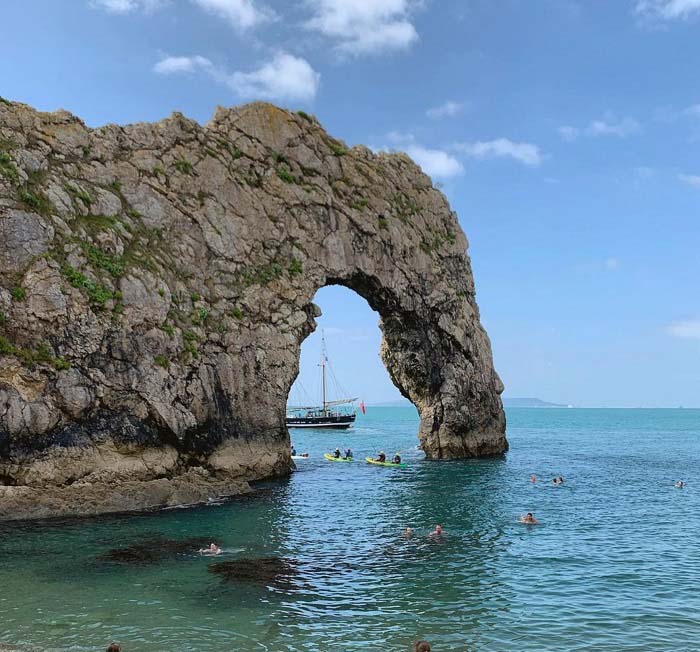 Surrounded by chalky cliffs, the bay at Lulworth is almost circular. This area is considered to be one of the best examples in Europe of the interaction of marine erosion on an alternating sequence of hard and soft rocks. You can see all the different layers in the rock where they form over time, visual evidence of the earth’s constant motion on the Jurassic Coast. 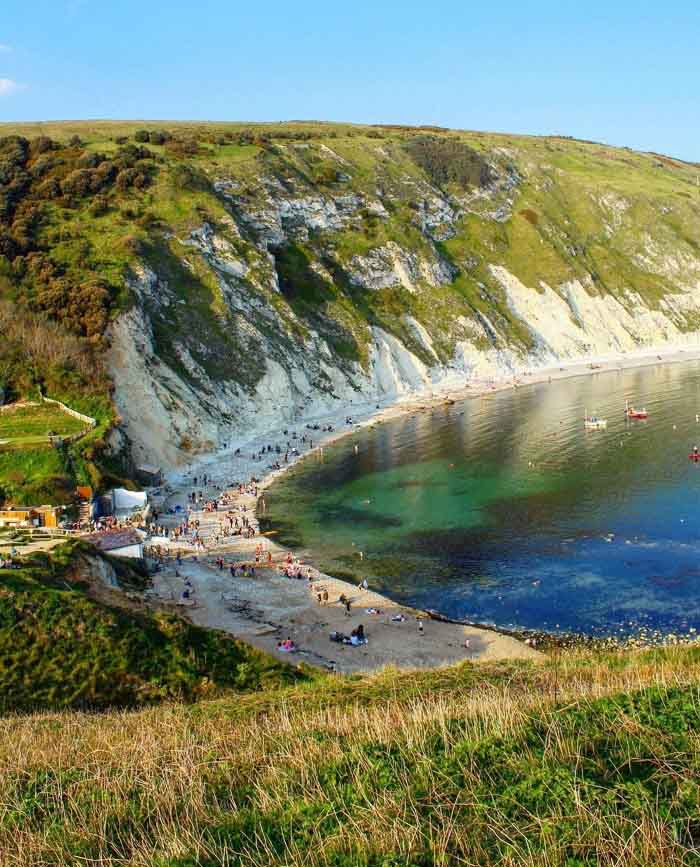 To the east of Lulworth Cove is the Fossil Forest, a cluster of fossilized stumps, as well as stems and roots, all dating back to the Jurassic period. It was formed about 150 million years ago when the sea level dropped temporarily allowing plants and trees to thrive in an area that was previously underwater. When the climate changes, water levels rise again and the forest dies, but the rest of them have been preserved by layers of calcareous sediments. In the forest, you can walk between trees that are much older than the surrounding rocks. 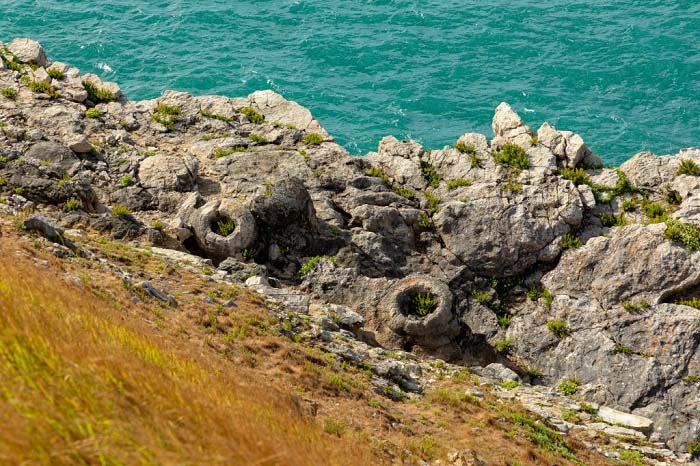